Okay, let’s start from comparing empty builds.
To measure FPS in unity3D I’ll use hand-made FPSmeter working with GUIText.
In AIR builds I’ll use different FPSmeters, usually in-built to the frameworks I’ll use.
Well, let’s see to the built apks (I built Captive Runtime in AIR and usual release build in Unity3D):
END_OF_DOCUMENT_TOKEN_TO_BE_REPLACED

Hi! This is a current list of the properties, methods, constants, etc. from the beta reference requiring Flash Player 11 or AIR 3.0:
END_OF_DOCUMENT_TOKEN_TO_BE_REPLACED

Hi, this is a syntax coloring scheme I use in my daily work in the FlashDevelop IDE: 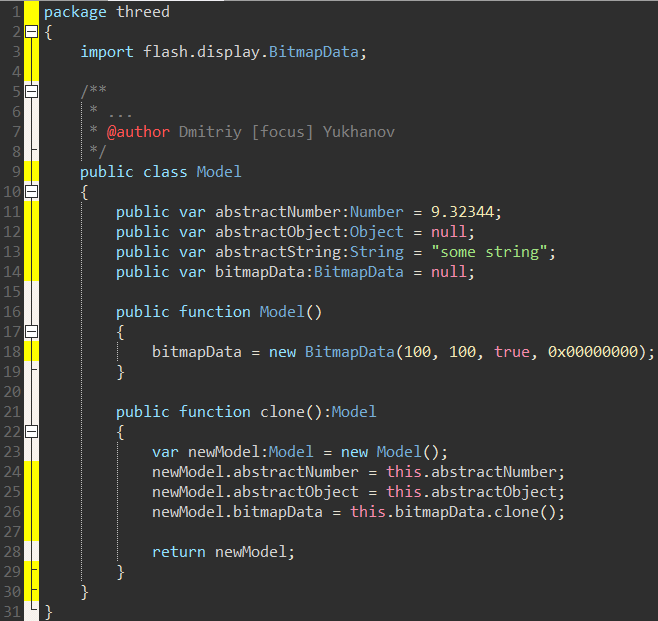 It greatly saves my eyes all day, hope you’ll like it too.
Its based on one another coloring scheme, but I don’t remember it’s author unfortunately 🙁
Download

Hi! If you wish to reverse (play from the end to the beginning) some of your animations in the Alternativa3D engine, you could try to set the AnimationClip‘s property speed to the negative value, but it could be harmful in most cases and don’t officially supported.

Unfortunately, there is no any information or suggests about inverting animations like so on the public yet and nothing about it in the official documentation. I think, current engine build (7.7) have no lightweight native implementation of this functionality. It could be nice to see something like boolean reverse property at the AnimationClip class, isn’t it? Bot there is nothing similar yet =(

So, with great tip from the Vladimir Babushkin (about rebuilding animation by keyframes with reversed time), I came to this piece of code:
END_OF_DOCUMENT_TOKEN_TO_BE_REPLACED

Hi! For sure, you already heard about FP11 Incubator build. And maybe watched and played some molehill-related demos already. And even you could write something three-dimensional with help of new playerglobal.swc. But new Flash Player version brings not just the low-level GPU API, but also many other nice functionality. I’d like to share all the Flash Player 11/12 related information, found in the prerelease Language Reference (~7MB) for the Incubator build.