Greetings!
As I previously wrote about flash files unpacking, you can achieve that using static unpacking or dumping swf file from memory usually. There are some exceptions however, and I’ll tell you about one such exception in this article.

Developer of the DoSWF protector (made in China) used few simple yet interesting tricks to prevent revealing of the original SWF, I like something harder than clicking one button)
I guess many poor “hackers” (as they like to name themselves) have no idea why dumped files are not working, and can’t do anything about it.

Let me show you an example how to unpack SWF encrypted with DoSWF (many pictures ahead!)… END_OF_DOCUMENT_TOKEN_TO_BE_REPLACED

Hey everybody!
Sometimes people ask me about delayed actions or threading in Unity3D and usually I suggest to use coroutines since they are suitable for the most cases I faced with.
But sometimes we need to use true threading and make some calculations faster, A* path finding for example.
So I decided to make a fast-written performance comparison of traditional code execution vs. threaded version. I searched for some simple threads managers and found this really simple Loom class from whydoidoit accidentally.

I did a simple test app for different platforms (I attached archive with apps and sources at the end of this post) and found some results pretty interesting.
All my code is trying to do – is just to make CPU think a little while working with huge array of Vector3D instances (10 000 000 for Desktop platforms and 1 000 000 for mobile platforms):

This is a simple dummy code as you can see.
I added simple Ant model (hello, Away3D examples authors! :)) with rotation at Update() to the scene in order to see how app can freeze while running this ugly code in main thread. 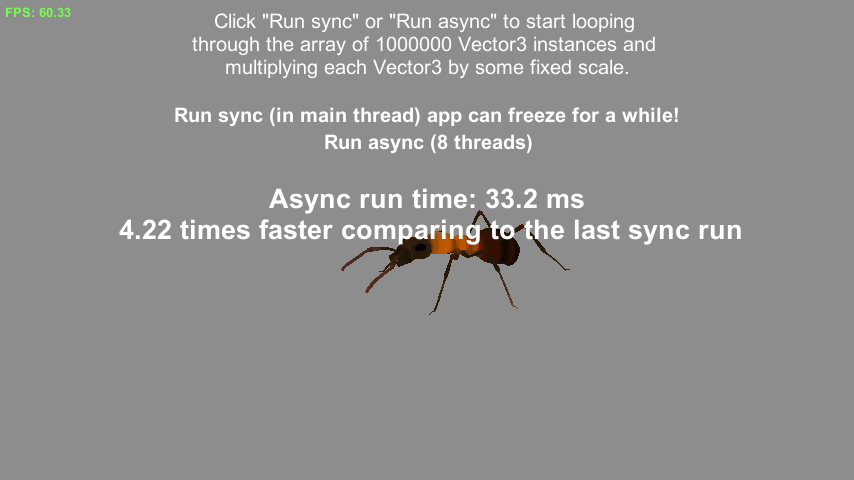 I did few tests of this code as I mentioned previously, both in sync (straight execution in main thread) and async (running it the separate threads) modes, here are results I’ve got (S – sync, A – async):
END_OF_DOCUMENT_TOKEN_TO_BE_REPLACED

Okay, let’s start from comparing empty builds.
To measure FPS in unity3D I’ll use hand-made FPSmeter working with GUIText.
In AIR builds I’ll use different FPSmeters, usually in-built to the frameworks I’ll use.
Well, let’s see to the built apks (I built Captive Runtime in AIR and usual release build in Unity3D):
END_OF_DOCUMENT_TOKEN_TO_BE_REPLACED

Hey!
It’s been too long since we’ve had a good topical content here. I’m going to fix it!)

Today we’ll speak about SWF changing using as3swf code library, as you could already guess from this post topic.
END_OF_DOCUMENT_TOKEN_TO_BE_REPLACED

I just posted my FlashGAMM Moscow 2012 report in the Russian blog section:
http://blog.codestage.ru/ru/2012/06/24/flash-gamm-moscow/

Since it’s a commonly Russian event, I did no English translation, you could look at my slides (they have English translation) about Flash Console, TheMiner, XFLTool and slide “engine” sources though.
You even can use Google Translate if you really wish to read my report)